"From the heart of an intersex teen, one who must ultimately choose male or female—family or true love—comes the story of a deeply emotional and perilous journey home. This is a young adult novel unlike any other—an authentic portrayal of the issues faced by a child growing up with a sexually ambiguous body.

Jameson can be like other boys after minor surgery and a few years on testosterone Well, at least that’s what his parents always say. But Jamie sees an elfin princess in the mirror, and male hormones would only ruin her pretty face. For him to become the man his parents expect, Jameson must leave behind the hopes and dreams of a little girl. But what is so wrong with Jamie’s dreams that they can’t be her life?" 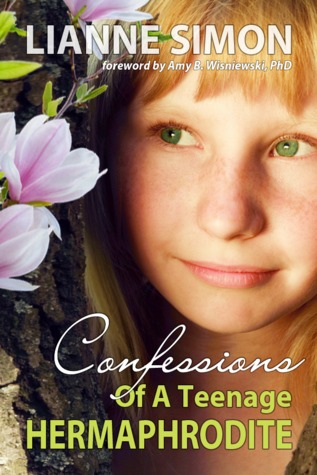 Confessions of a Teenage Hermaphrodite is marketed as a YA novel, but I think of it as a contemporary fiction coming-of-age more than a YA (which tend to be more one-dimensional adventures). In it, Jamie struggles with his/her gender identity. It's a very solid case (reading it as an adult) of what gender Jamie is expected to be, and what gender he enjoys and prefers being.


For Jamie, as for all of us, there must be an acknowledgement of WHO we are, regardless of everything else in the world, even regardless of the people we love. It's difficult to learn, and certainly Jamie's journey through this is realistic. The scenarios are realistic, though I found his voice in the book to be somewhat flat (likely because gender identity is the sole issue that he's struggling with- although romance and bullying and body image come into the big picture in a delightfully touching way).


This could be because, for an intersex teen, gender identity would be the largest and most dominant issue, and everything else takes a back seat. For me, as a teen, I always felt like I was dealing with a dozen huge issues at once, more than one overwhelming issue.


I would definitely recommend this novel for anyone curious about what it's like for intersex individuals (aka hermaphrodites)- it's definitely a different issue than sexual preference or femininity in men/masculinity in women. I'd also recommend it for fans of contemporary coming-of-age stories, and those who seek a common voice of an underdog dealing with life's unfair and stringent restrictions.

*I was contacted by the author to review this book, but to tell the truth I've had my eye on it for months. As you know from some of my previous book reviews, I have a fascination with gender identity, transgenderism, the intersex condition, etc. I'm delighted to be able to delve into the fiction (and non-fiction) side of these issues. Thank you, to all those authors brave enough to write realistically and candidly about these situations.