I'm excited to be part of the blog book tour for S.G. Rogers' YA Fantasy novel, Tournament of Chance. This adventure story features a medieval setting, magic, coming of age, reluctant heroism, a main female character, and more!

I like that the hero is female, and an archer, and that she has many male friends (but when walking into a room with men, she doesn't jump into romantic what-ifs or sexual tension). It felt very natural and real as any woman's life would be, especially in that setting.

I did feel the pacing was a little too fast- I wanted it to slow down so I could enjoy a deeper level to the court intrigue. I prefer villains that are shades of grey, instead of outright mean for the sake of being mean, which is less believable to me. But for a middle grade novel, I suppose a fly-by explanation of the setting's politics is all that is expected.

Given the pacing and the fact that everyone just accepted things at face value (despite personal risks or a lifetime of belief), this felt to me more like a TV min-series or anime than a novel. I think it would translate well (I'm imagining a sort of Sinbad meets Xena thing).

It's definitely an ensemble cast journey, which has a certain appeal in the amount of possibilities it possesses. And despite my personal frustrations with the depth of it, it's a fun and quick adventure of a read.
I recommend it for middle-grade readers who are fans of sword-and-sorcery series!

In addition to the great giveaway (see below), S.G. Rogers kindly provided me with her top ten list of Kick-Butt TV and Film Heroines (showing that she clearly has great taste). Enjoy! 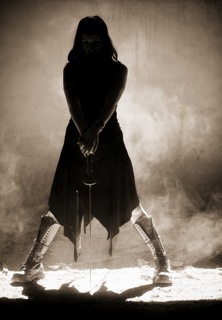 For me, the perfect kick-butt heroine has to have the right mix of looks, attitude, and ability.  She must excite my admiration to be memorable, and more than anything be the kind of person I can relate to.  When an otherwise great character crosses into cartoon-character invincibility, my interest level drops off.  Many of the women on my list aren’t traditional model-types, either, which is an extra plus in my opinion.

1)            Nikita (Peta Wilson) in TV series La Femme Nikita (1997)
Feminine, yet lethal, this super-secret spy was also vulnerable and approachable. Every episode brought an awesome new wardrobe, and a new opportunity to root for Nikita’s relationship with the inscrutable Michael (Roy Dupuis). Nikita had a job to do, did it well, and looked fabulous doing it;

2)            Starbuck (Katee Sackhoff ) in Battlestar Galactica TV miniseries (2003)
The most deadly pilot in the firmament, Starbuck could fraternize with the men as well as seduce them. I loved her no-nonsense tomboy demeanor, but I was mesmerized by her interplay with the delectable Apollo (Jamie Bamber);

3)            Lorna Cole (Rene Russo) Lethal Weapon 3 (1992)
My jaw dropped when Lorna kick-boxed the bad guys in that film, and I laughed with delight when she compared her scars with Riggs (Mel Gibson). Yes, she’s impossibly gorgeous, but Rene was nearing 40 when she made Lethal Weapon 3;

4)            Sarah Connor (Linda Hamilton) in Terminator 2: Judgment Day (1991)
Sarah Connor was focused and motivated, the ultimate protective mother taken to an extreme. Talk about pushing back against the traditional view of beauty, Linda opened my eyes to a whole other level of cool;

5)            Trinity (Carrie-Anne Moss) in Matrix (1999)
Another unconventional beauty, Trinity was the apex of cool.  She seemingly had it all together, but her weakness was Neo.  I loved her fight scenes, and she looked sleek and sexy in latex;

6)            Nikita (Anne Parillaud) in Nikita (1990)
This movie was far grittier than the television series, and the focus was on Nikita’s struggle to be truly free of her brutal past.  As Nikita, Anne Parillaud was hopelessly chic and vulnerable, but when called on to perform an assassination she was right on the money;

7)            Buffy (Kristy Swanson) in Buffy the Vampire Slayer (1992)
The fluffy cheerleader harnesses her hidden talents to off demons and vamps.  I loved the humor in this movie, as well as Buffy’s fight moves;

8)            Katniss Everdeen (Jennifer Lawrence) in Hunger Games (2012)
Katniss got on my list for her expertise in archery.  Plus, I had to give her extra credit for being able to run fast, climb trees, and twirl in a fiery prom dress;

9)            Victoria (Helen Mirren) in RED (2010)
Poor Victoria wants to go straight, but she simply can’t.  So she takes the odd contract from time to time, just to take the edge off.  Victoria can be your best friend, or your worst enemy.  And I adored the way Helen Mirren portrayed her as a sexy senior;

10)            Valeria (Sandahl Bergman) in Conan the Barbarian (1982)
Valeria’s famous line was “Do you want to live forever?”  Well… yes, I do. But I appreciated her zest for battle. You’ve got to love a character that doesn’t shy away from adventure.  She could swing a sword alongside Conan, with a body that wouldn’t quit.

Many of the characters on my Top Ten list actually motivated me to make changes in my life, such as taking up martial arts, weight lifting, and running.  Others provided a little welcome escapism.  But each heroine was memorable in her own way.

Have I left out your personal favorite?

Thanks to S.G. Rogers for a great list of kick-butt heroines (including several of my own favorites)! I love that these characters empowered and motivated you, and we should all aspire to personal kick-butt heroine status in our lives.

Want to win a $25 gift card?
a Rafflecopter giveaway