"Kidnapped from Galway, Ireland, as a young girl, shipped to Barbados, and forced to work the land alongside African slaves, Cot Daley's life has been shaped by injustice. In this stunning debut novel, Kate McCafferty re-creates, through Cot's story, the history of the more than fifty thousand Irish who were sold as indentured servants to Caribbean plantation owners during the seventeenth century. As Cot tells her story-the brutal journey to Barbados, the harrowing years of fieldwork on the sugarcane plantations, her marriage to an African slave and rebel leader, and the fate of her children—her testimony reveals an exceptional woman's astonishing life." 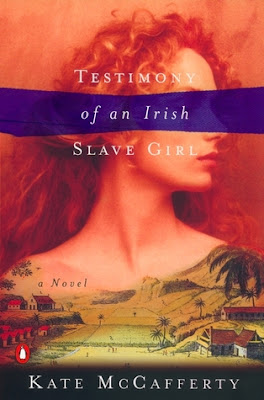 Testimony of an Irish Slave Girl was a struggle to get through for two reasons:
The first is that it was written more as a third-person narrative biography, making it difficult to personally relate to the characters and therefore difficult to personally care about their strife. Although there is strife and sorrow by the bucketful, and it's horrible and shocking, it's very removed and thus by the middle of the book it becomes background noise rather than the driving action.

The second is that it chronicles the actual events of white slavery (and slavery in general), which is a rough subject to delve into. Cot's story is fiction, but the fact of the British sending droves of Irish slaves to the Caribbean and other slave areas was news to me...and shocking news at that. The proclamations listed in the book are real, as is the wording of them (which made me ashamed, even more, to be of British descent), as are the attempted rebellions.

The best part of this book, in my opinion, is the racial struggle that Cot goes through. It has a ring of truth to it- here's this angry girl, white, raised to believe she's better than black and brown races, working as a slave with and under them. She doesn't endure a Disneyfied change of heart after seeing the worth of all humans. She doesn't have an epiphany that maybe her old world is dead wrong. She doesn't encounter a mystical world-changing event of falling in love.
She comes to her own conclusions, incorporating spiritual beliefs and human nature in a very realistic way.

Cot is not a crusader or a hero- she's just an Irish woman raised as a slave. And though the narrative makes it difficult to feel as if you are with her all the way, the author does an excellent job of exploring the human emotional gamut through Cot.

I recommend this for lovers of history, those fascinated with historic slavery and white slavery and the oppression of the Irish by the British, and those in the mood for a long, long read.