Synopsis according to Goodreads:
"A BELLE OF THE BALL…
Lady Annabelle Marchant was a belle of the ball in London until she used her psychical senses to save a man’s life. She failed miserably, leaving him dead and her disgraced. All she wants now is a chance to comfort his widow by cleansing the woman’s home of her husband’s restless spirit. But the widow’s son, the beastly Lord of the Manor, accuses her of coming to the wilds of Cheshire to snag him as a husband. Thoroughly disgusted, she is bent on proving him wrong.

…BECOMES PERSONA NON-GRATA…
Lord Rufus Marlesbury, the Earl of Terrance, is suspected of murdering his father. He has come home to clear his name by finding the real killer before the new year or the king has promised that Rufus will be called in front of the House of Lords to answer for the crime. He does not have time to waste fending off a marriage-minded miss who has inveigled an invitation to his home by playing on his grief-stricken mother’s worst fears.

…WHEN A MURDERER IS ON THE RAMPAGE
With an unruly manor ghost terrorizing the occupants and corpses piling up in the village, Belle must find a way to see the man beneath the beast and Rufus must learn to believe in the love of a woman who has no reason to trust him. Only by working together can they stop a vengeful ghost before it torments the guests or before the killer strikes again." 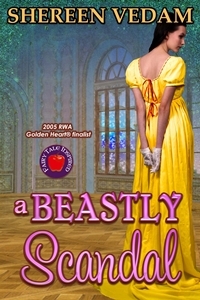 I'm not normally much of a romance reader, but I do love me some history, especially Regency history. And in A Beastly Scandal, Shereen Vedam has written a fun little romp through Regency romance.


It's a quick read, and a lighthearted one. Belle is a woman who knows her own mind, and doesn't bend to the will of others (although she attempts to live within the rules of her society). Her supernatural senses give her an edge when communicating with others, which seems to have replaced her need to be a critical and analytical thinker.


Lord Rufus is a man who worries too much, and wears his emotions on his face (unknowingly). In the stern patriarchal society that was Regency London, I can well believe Rufus' harsh self-criticisms and bullying of others. He's a bit ham-fisted and trusting in his quest, but then, if you were brought up to believe everyone else was there to take care of you and do as you say, I suppose you would be trusting.


This book has more in it than I expected: love, yes (and instalove, which is my least favorite thing but in a short romance novel I expected it), but also espionage and intrigue, supernatural stuff, a fair amount of historic detail, and characters whose external visage is at odds with their internal desires.
Belle's abilities meant that the usual journey of discovering someone's motivation was cut short, but at least everyone in the book had motivations and fears, and the concept of "no one is fully who and what they seem" was carried off with success.