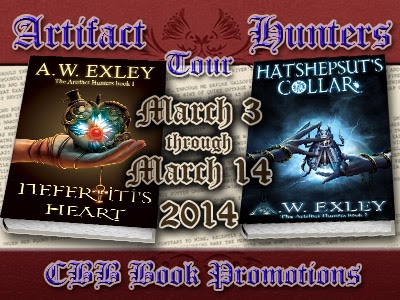 The Artifact Hunters tour features Nefertiti's Heart and Hatshepsut's Collar by A.W. Exley, a new adult Mystery/Steampunk series. Check out the tour page for the full list of tour stops. 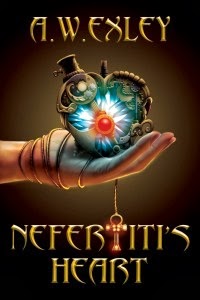 Cara Devon has always suffered curiosity and impetuousness, but tangling with a serial killer might cure that. Permanently.

London, 1861. Impoverished noble Cara has a simple mission after the strange death of her father – sell off his damned collection of priceless artifacts. Her plan goes awry when aristocratic beauties start dying of broken hearts, an eight inch long brass key hammered through their chests. A killer hunts amongst the nobility, searching for a regal beauty and an ancient Egyptian relic rumored to hold the key to immortality.
Her Majesty’s Enforcers are in pursuit of the murderer and they see a connection between the gruesome deaths and Cara. So does she, somewhere in London her father hid Nefertiti’s Heart, a fist sized diamond with strange mechanical workings. Adding further complication to her life, notorious crime lord, Viscount Nathaniel Lyons is relentless in his desire to lay his hands on Cara and the priceless artifact. If only she could figure out his motive.
Self-preservation fuels Cara’s search for the gem. In a society where everyone wears a mask to hide their true intent, she needs to figure out who to trust, before she makes a fatal mistake. 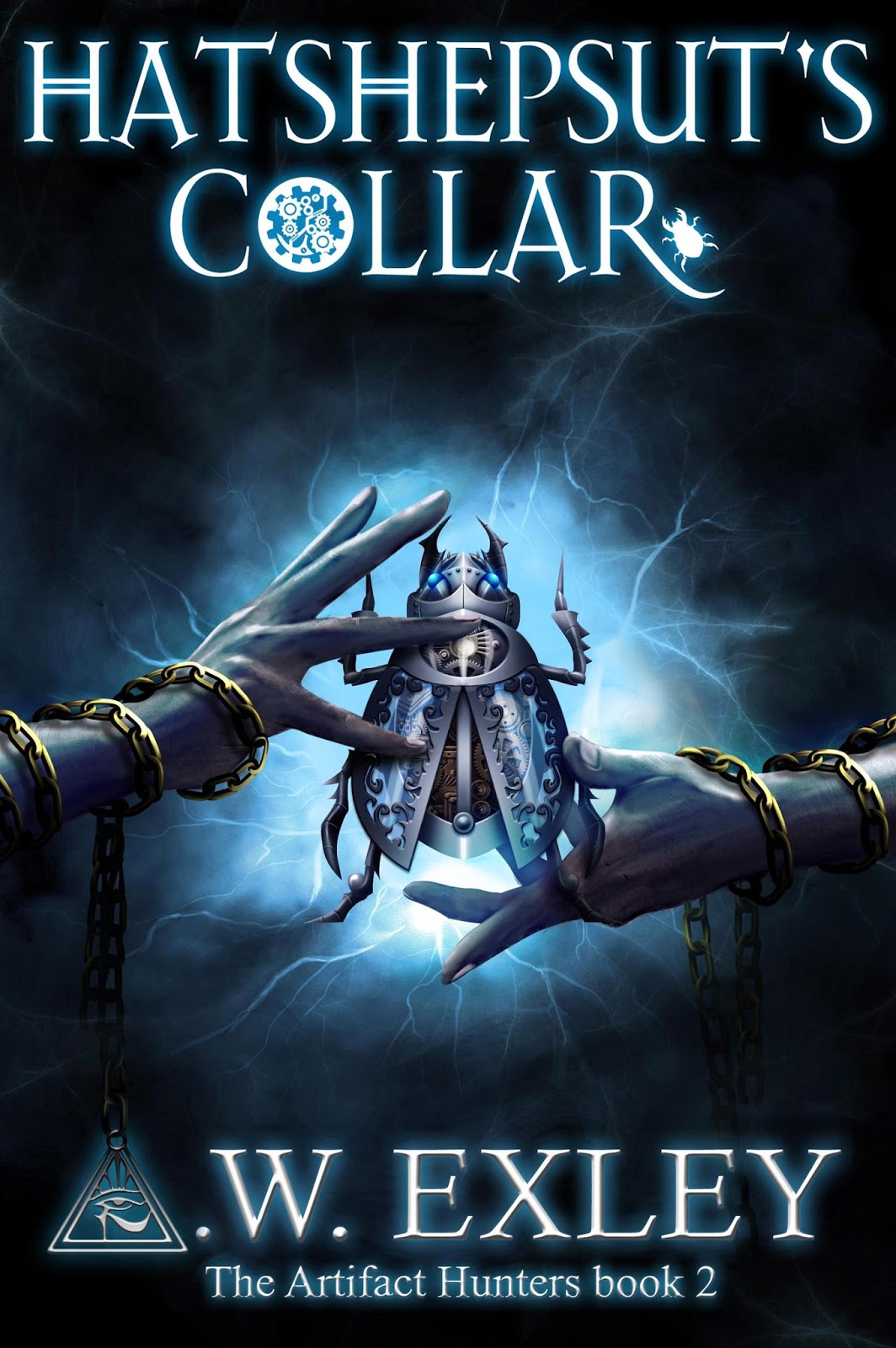 An ancient Egyptian artifact is driving Queen Victoria insane, and that’s not top of Cara Devon’s growing list of problems.
Viscount Nathaniel Lyons is a man of numerous secrets, but there is one in particular that threatens his fledgling relationship with Cara. Stunned by Nate’s revelation, and before she can absorb the ramifications of his actions, he is arrested, charged with treason and imprisoned in the grim Tower of London. He stole something the mad queen wants, and only has days to deliver, before his date with the executioner.
Although sorely tempted, Cara can’t let him die on Tower Green, not when their connection means she would share his fate.
Only together can Cara and Nate figure out how to wrestle Hatshepsut’s Collar from around the queen’s neck, before she plunges Britain into a world war. The search for answers sends Cara to the opulent Winter Palace of St Petersburg and the frozen depths of Siberia, with every step shadowed by an enemy with his own dark plans. 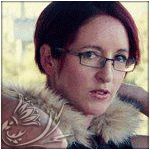 Anita Exley's Biography:
Books and writing have always been an enormous part of A.W. Exley’s life.
She survived school by hiding out in the library, with several thousand fictional characters for company. At university, she overcame the boredom of studying accountancy by squeezing in Egyptology papers and learning to read hieroglyphics.
Today, Anita writes steampunk novels with a sexy edge and an Egyptian twist. She lives in rural New Zealand surrounded by an assortment of weird and wonderful equines, felines, canine and homicidal chickens.

My Review:
Nefertiti's Heart is an interesting mix of Victoriana steampunk, serial killer thriller, sexy romance (not explicit, but steamy), and supernatural drama. I wasn't quite sure what to make of it, initially- it took some time to like Cara (although when in doubt, add a dirirble pirate) but eventually I came around to her. I'd find myself thinking "tsk tsk...you should trust Fraser with that information" and then two chapters later Cara would say that.


There are a lot of rich side characters (Amy and Helene are two favorites) and some plot feints. Although it has the elements of a thriller, the focus is firmly on Cara and her dealing with the mystery (and her past), instead of cops-chasing-killers. I also found the villain to be reasonable, a "whackadoodle" (as Cara puts it) shaped that way by nature and nurture, instead of some mustache-twirling paragon of evil.


I would recommend this for fans of adventure, Victoriana, steampunk, female protagonists, steamy PG-13 romance, and supernatural stories with a tinge of historic element to them.