Book Review: Son of a Witch

Synopsis according to Goodreads:
"Liir hid in the shadows of the castle after Dorothy did in the Witch. Left for dead in a gully, the teen is shattered in spirit and body. But silent novice Candle tends him at the Cloister of Saint Glinda, and wills him back to life with her music.

What dark force left Liir in this condition? Is he really Elphaba's son? He has her broom and her cape - but what of her powers? Can he find his supposed half-sister, Nor, last seen in the forbidding prison Southstairs? Can he fulfill the last wishes of a dying princess? In an Oz under new and dangerous management, can Liir keep his head down long enough to grow up?" 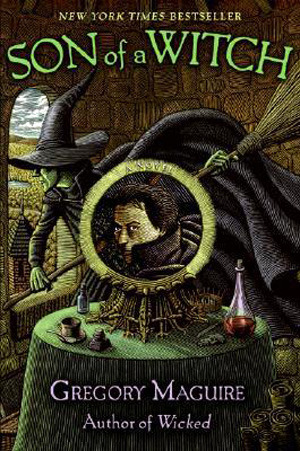 Son of a Witch is the second novel in the Wicked Years trilogy (trilogy? series? I don't know yet). I liked Wicked well enough, but I felt that Son of a Witch was even better.

It tells the story of Liir, who is rather forgettable in the first novel, and the ups and downs of his coming of age. I won't lie- there are times in this book that I was yelling at him. And fewer times that I was cheering for him. But it all worked out in the end, which made me want to dive right into the third novel (A Lion Among Men) right away.

I love the continuing political commentary, this time on a more personal level regarding compliance vs subservience, piety as political tool, and the nature of truth. I definitely recommend this for anyone who read Wicked, whether they liked it or not. But you can also read it as a stand-alone without losing anything in the plot.