Synopsis according to Goodreads:
"One choice can transform you-- or it can destroy you. But every choice has consequences, and as unrest surges in the factions all around her, Tris Prior must continue trying to save those she loves--and herself--while grappling with haunting questions of grief and forgiveness, identity and loyalty, politics and love.
Tris's initiation day should have been marked by celebration and victory with her chosen faction; instead, the day ended with unspeakable horrors. War now looms as conflict between the factions and their ideologies grows. And in times of war, sides must be chosen, secrets will emerge, and choices will become even more irrevocable--and even more powerful. Transformed by her own decisions but also by haunting grief and guilt, radical new discoveries, and shifting relationships, Tris must fully embrace her Divergence, even if she does not know what she may lose by doing so." 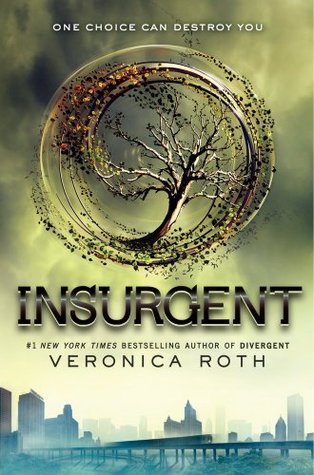 After enjoying Divergent, then watching the movie, I finally decided to continue the series with Insurgent. And I'm glad I did! The novels resumes minutes after Divergent ends (which, given it's been 15 months since I read the first book in the series, threw me at first). There's less backstory and world-building to do, so it seemed more action-oriented.

I continued to enjoy Tris' perspective and personality. She's reckless, selfless, still trying to prove herself (er, to herself), smart, analytical, and believably, beautifully flawed. Her relationship with everyone suffers in realistic ways, based on her decisions and actions (both in the first book and in this one), and I lovelovelove when an author addresses consequences.

My only problem with the book is the major reveal. No spoilers, and all that, but it's not anything original, and we all saw it coming chapters before it happened. It also relies on fake science (that genetics dictate personality) which pretty much undermines the entire faction system (where environment dictates personality). So it felt disjointed to me, in that sense. But then the action continues and there's still forward momentum and resolutions to be obtained.

Overall, this was a great sequel to Divergent, and has me reaching for the third book (Allegiant). I recommend it for fans of the first book, and I recommend the series for fans of dystopian YA, believably flawed and strong female protagonists, and interesting world-building. Also, if you live in Chicago you'll probably enjoy the nods to familiar landmarks (which had me looking at Google Maps a lot).