Synopsis according to Goodreads:
"It is 1803, six years since Elizabeth and Darcy embarked on their life together at Pemberley, Darcy’s magnificent estate. Their peaceful, orderly world seems almost unassailable. Elizabeth has found her footing as the chatelaine of the great house. They have two fine sons, Fitzwilliam and Charles. Elizabeth’s sister Jane and her husband, Bingley, live nearby; her father visits often; there is optimistic talk about the prospects of marriage for Darcy’s sister Georgiana. And preparations are under way for their much-anticipated annual autumn ball.

Then, on the eve of the ball, the patrician idyll is shattered. A coach careens up the drive carrying Lydia, Elizabeth’s disgraced sister, who with her husband, the very dubious Wickham, has been banned from Pemberley. She stumbles out of the carriage, hysterical, shrieking that Wickham has been murdered. With shocking suddenness, Pemberley is plunged into a frightening mystery." 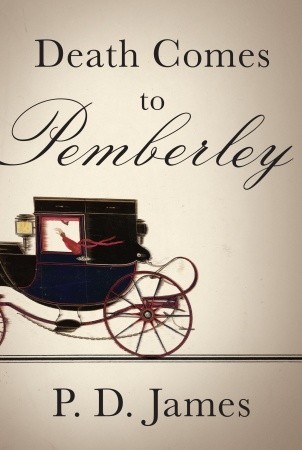 Well, I am not a true Janeite (no surprise, I suppose) because I have the very unpopular opinion of disliking Death Comes to Pemberley. I expected a mystery set in Jane Austen's world, but what I got was a snoozefest.

That's not to say that P. D. James' writing style is amateur. The author captures the cadence and lilt of Austen's voice pretty darn well. The problem is that it lacks entertainment. Austen's appeal lies largely in her witty descriptions of characters, and our growing to know them throughout the book by their actions and reactions. James uses characters we already know and, rather than flesh them out more, basically explains things that Austen left vague (like Darcy's motivation in certain aspects).

The mystery is not tantalizingly dangled in front of the reader, for us to piece together or even engage with. A thing happens, a period-appropriate legal response happens, and then everything is explained. There was absolutely no sense of suspense or intrigue, or titillation, at all.

Overall, this story was flat and dull to me, a series of events that plod along with nothing to keep me invested. Part of this is probably because it's largely centered around Darcy (whom I actually dislike), and there's a style of "blah blah blah, he said" that I found grating on the nerves. While James is stylistically quite Austen, the meat of the story is lacking.

I recommend it only to huge Austen fans, those that adore P&P (and Darcy) and want to see the characters again in any respect, and those that enjoy long-winded, dry explanations for everything.