After reading The Lens and the Looker and The Bronze and the Brimstone, I am lucky enough to be able to interview author Lory Kaufman. At the end of this interview are the rules for my BOOK GIVEAWAY! Wahooo!

1) Why did you choose 14th century Verona as the 'hardcase History Camp' setting the elders choose for sending Hansum, Shamira, and Lincoln to (and then later their actual time-travel destination)?

It’s hard to definitively answer WHY I chose this setting. You see, I started writing bits and pieces of what would become my History Camp stories back in the early 1990’s and it took me till 2005 when my kids grown and my business to a state where I could write almost full time to accomplish my childhood dream of writing futuristic adventures.

However, I do have a love for medieval books and movies and I really enjoy Shakespeare, Romeo and Juliet being my favorite. Also, since I was inspired to be a writer by the futuristic books I read in high school, Lord of the Flies, Brave New World, 1984, The Crysalids, etc, I always wanted to write for that same audience, which I see as 14 to 144. So, put it all together and you get The Lens and the Looker, The Bronze and the Brimstone, and the soon to be published, The Loved and the Lost. 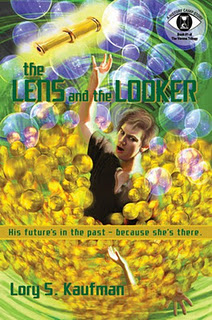 2) What would you envision to be the single best and single worst aspect of the future world (technology-wise, or socially) that you've created for the History Camp series?

The future world I’ve built for the History Camp stories are mostly set in the 24th century. To live in this era would be to live in a time when there is no want and no trouble one can get into that would threaten a person’s physical safety. Plus, the education system is such that everyone can reach their potential . . . if they want to. And that’s the rub, isn’t it. From an early 21st century perspective, there is no worst aspect to this future. But human nature being what it is, when you grow up in a society where the livin’ is easy, some people, or “hard cases”, as they’re called in the books, tend to take their privileged situations for granted. That’s when Hard Time History Camps act like the boot camps for today’s misguided youth, scaring them into a positive understanding of the world around them. So, I guess that means that the best and worst aspects of the world which History Camps exist is the same thing.

3) How many books do you think will comprise the History Camp series? When will The Loved and The Lost be available for purchase?

I envisage History Camp as an umbrella concept under which scores of stories can exist, from all periods of history. The first series, The Verona Trilogy, takes place in 14th Century Verona, Italy, but I already have been working on several other History Camp stories. The Olive Tree (working title) that takes place in 2350 BCE, when the olive oil industry was as important as the petroleum industry is today. I also have been researching another set of stories that take place in the 15th century, CE, when Europeans first bumped into the Caribbean Islands and, within a century, had completely exterminated the Arawak Indians from several islands.

As I see it now, all the stories will be about youth from the 24th century going back and getting somehow involved with people from the past, so they really appreciate what modernity has to offer. This is so they won’t make the same mistakes that have driven so many human cultures to the brink of extinction over the ages. Oh, and The Loved and the Lost . . . It will be available March 2012. 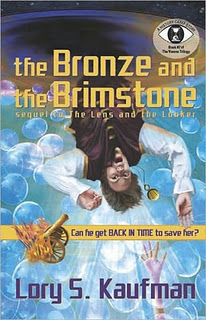 4) The series involves an intense level of knowledge about lens grinding, the physics behind telescopes, canon casting, and the making of black powder, and the history of 14th century Italy (including religion, dress, and politics). How long did you have to research these aspects before feeling comfortable enough to include them in the books?

Research took years. In the beginning, there were months were I did more research than writing. As for lens grinding, there is very historical literature on it, as it’s not like today, where there are patents and international conferences between industries where knowledge is sold, licensed and otherwise shared. Craftsmen in the past were secretive, and their businesses generally family operations. In fact, your readers might be interested to know that early glass and crystal makers in Italy forbid many of their workers from leaving the Island of Murano to keep their secrets. Apprentices and journeymen couldn’t leave the cities they lived in or get married without their master’s permission.

As for the research, it took over six month to get the information for ancient lens making, and that was from half a dozen university libraries and researchers all over the planet. And then, when I had it all written down, my editors made me cut it down by two thirds, to make sure I was concentrating on the story instead of writing thesis on the craft. I choose lens making in the 14th century, by the way, because it is a good example of seeing a craft just before it is turning into a science. In this case, the science of optics.
Cannons, black powder, clothing, etc, all had similar problems to varying degrees, but as far as researching before I start writing the story, it doesn’t work like that for me. I get an idea of what I want to say and how I want to say it, and I start writing. The beginnings of the writing suggests the research. Then when I start researching, it causes my writer’s imagination to start fleshing out the story and bringing up needs for more research. I on and on like this for months at a time and a story slowly layers.

5) In The Bronze and the Brimstone, you jump from Hansum's modern tech being something seemingly harmless (a looker) to a direct instrument of warfare (canon and black powder), as a way for Hansum to impress the Podesta. You hint at the backlash this will cause to the outcome of all wars from that point onward, essentially changing the flow of history. Will you ever expound more on this, and the threat those consequences may have to the established future?

Actually, the first telescopes weren’t thought of as scientific instruments, being pointed up at the moon and the stars. They were looked at as instruments of war. The first thing that our kids from the future do when they build one is look at the moon, but when Agistino, their medieval master sees it, and when Feltrino and then Nicademo see it, their first thoughts instantly go to wanting it as an instrument of war. Unfortunately, most inventions in human history were innovations made for taking something away from the tribe next to you. In fact, when Galileo improved his first telescopes, he sells it as an instrument of war, because, I guess, that’s what paid the bills, although, at the same time or a bit later, he writes about the rings of Saturn and moons of Jupiter. And see the trouble that got him into.

The other point you ask about is the changing the flow of history by introducing things early or by going back in time and changing events. This becomes a real problem in the third book, The Loved and the Lost, even though the time commission thinks they’ve cleaned up the mess from the first two books.

Thanks so much for taking the time to answer my questions, and I can't wait to read the third installment of the History Camp series!

And thank you, Beth, for inviting me to your forum and also for reviewing my books. I hope your readers have been enriched by the reading they’ve done in 2011 and I wish each and every one of them happy reading in the new year. Cheers, -Lory Kaufman

The Book Giveaway:
To enter to win a brand new copy of BOTH of the History Camp books already in publication, simply follow my blog via GFC and leave a comment below. That's it!
I'll draw the winner using random.org on Mon 11/12, and announce the winner then.

*Please note: these books will be sent from the publisher, not directly from me, so it may take up to 4 weeks for them to arrive.

Labels: adventure, book review, books, giveaways, historical fiction, lit love, lory kaufman, the bronze and the brimstone, the lens and the looker, YA