Synopsis according to Goodreads:
"Remember the woman you used to be ...

Alice is twenty-nine. She is whimsical, optimistic and adores sleep, chocolate, her ramshackle new house and her wonderful husband Nick. What's more, she's looking forward to the birth of the 'Sultana' - her first baby.

But now Alice has slipped and hit her head in her step-aerobics class and everyone's telling her she's misplaced the last ten years of her life.

In fact, it would seem that Alice is actually thirty-nine and now she loves schedules, expensive lingerie, caffeine and manicures. She has three children and the honeymoon is well and truly over for her and Nick. In fact, he looks at her like she's his worst enemy. What's more, her beloved sister Elisabeth isn't speaking to her either. And who is this 'Gina' everyone is so carefully trying not to mention?

Alice isn't sure that she likes life ten years on. Every photo is another memory she doesn't have and nothing makes sense. Just how much can happen in a decade? Has she really lost her lovely husband for ever?" 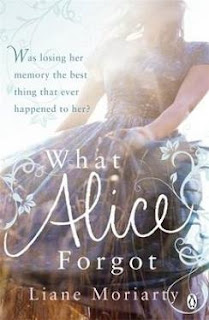 What Alice Forgot had me captivated from the first chapter. I felt drawn in and personally invested in each of the characters, even the ones I didn't like. For several nights in a row, I stayed up until midnight just to read one (or five) more chapters.

The pace is typical of a 'whodunit' mystery, although the mystery is not a murder, but the ten years that Alice forgets, and how she transitioned from a wide-eyed twenty nine year old to her brisk and busy thirty nine year old self.

This book had me asking "what if that happened to me? how would I react?" a lot....and the answer was that Liane Moriarty hit the nail on the head. The story is believable, charming, a beautiful blend of comedy and drama, and the characters will remind you of yourself at times.

I highly recommend this book, especially to female readers. It would also be a great one for book clubs!