Synopsis according to Goodreads:
"Libby's best friend and fabulous fashion designer, Dev, hatches a plan to jet down South and hawk his period gowns to the wives and girlfriends of Civil War re-enactors. With a pang, Libby abandons her plan to visit her boyfriend, Garrett, in Boston and jumps at the chance to help run "Confederate Couture," and let her inner history nerd loose in a 19th century playground. But Libby and Dev aren't whistling Dixie for long. Between the constant travel from battle ground to dusty battle ground (with no Starbucks in sight, mind you), blistering heat, and a violent ghost set on romantic revenge, they quickly realize Alabama's no sweet home. And the boys. . . well, let's just say Libby's got the North and the South fighting for her attention." 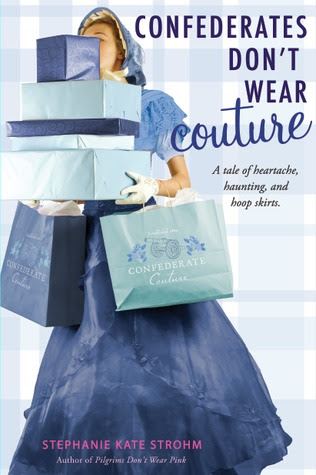 I had a lot of fun with Confederates Don't Wear Couture. The kind of fun that makes you laugh out loud on the bus and get looked at like you're a crazy person. But I couldn't help it-- Strohm writes fun and wittastic dialogue for Libby, a main character who quickly grew dear to my heart. Apparently, Libby's adventures started in her first book; this is book 2.


Not knowing Libby from the first book was no problem- I felt like she was my long-lost little sister by the end of Chapter 1. This girl loves history and historical reenactment....clearly, she's darling. I also loved Dev, despite his unrealistically over-the-top nature. Every time I started feeling like he was a characature instead of a character, the author dropped some unexpected personality quirk in there, and I stopped being suspicious. Both teens end up on a wacky summer-long adventure of living history that had me itching to call up the Washington Civil War Reenactment HQ. Or jump right into AL.


I won't give you any spoilers, but I applaud Strohm's handling of the romantic relationships and tensions within the book. She took a topic that often has a predictable outcome and turned it on its head....realistically. At first I wanted to root for The South (well, he *is* perfect, and I didn't know Garrett or his good qualities from book 1, and I hate petty jealousy), but Libby showed rare foresight...and insight...and I like that Strohm took an adult approach to it.


I also adored the little historical reenactment details she put in there (even when she caged them in dialogue to give us readers a less-pedantic lecture on how cool history is). The whole coffee situation was hilarious to me, both as a coffee addict and a renaissance faire brat, and the ghost story mystery added just enough dialogue to interest people who, unlike me, weren't utterly delighted at the descriptions of the period gowns.
A book that makes me want to sew Victorian-era dresses is a winner, in my opinion!


I recommend this book for lovers of historical reenactment and living history, fans of emotionally mature but still rompy YA, those who enjoy a main female character with a quirky sidekick, fans of the South, book readers who like exploring the modern perspective on the Civil War, fans of young romance, and folks who like the romance of a wistful summer adventure. And, of course, fans of Strohm's first book.