Synopsis according to Goodreads:
"The world was called Montefiore, as far as she knew, and from her aerie on every side all the world descended.


The year is 1502, and seven-year-old Bianca de Nevada lives perched high above the rolling hills and valleys of Tuscany and Umbria at Montefiore, the farm of her beloved father, Don Vicente. There she spends her days cosseted by Primavera Vecchia, the earthy cook, and Fra Ludovico, a priest who tends to their souls between bites of ham and sips of wine.


But one day a noble entourage makes its way up the winding slopes to the farm -- and the world comes to Montefiore. In the presence of Cesare Borgia and his sister, the lovely and vain Lucrezia -- decadent children of a wicked pope -- no one can claim innocence for very long. When Borgia sends Don Vicente on a years-long quest to reclaim a relic of the original Tree of Knowledge, he leaves Bianca under the care -- so to speak -- of Lucrezia. She plots a dire fate for the young girl in the woods below the farm, but in the dark forest there can be found salvation as well ...
The eye is always caught by light, but shadows have more to say." 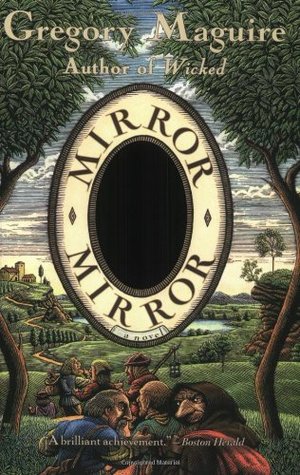 Mirror Mirror< is a unique novel, and a blending of the classic Snow White fairytale elements with the darker rumors of Lucrezia Borgia. There's something charming about mixing historical fiction with fairy tale, and the trademark Maguire insertion of philosophy. Having recently read a fantastic true-to-facts novel about the Borgias, it was interesting to get this wicked queen side.

For a powerful female historical figure to further vilify into a wicked fairytale queen, Lucrezia Borgia was an excellent pick. Maguire didn't include much of actual history, just hinted at the nastier rumors spread about her (the incest, the poisoning, the rampant lust) and played on common concepts of jealousy, paranoia brought about by medieval health treatments, and how obsession is inherently destructive.

He also weaves in quite a bit of Christian philosophy and lore, very, very subtly. If you've never read a Gregory Maguire book, they run contrary to most novels- you're never very intimate with a character, as his focus is on the over-arcing story elements. But then out of nowhere he'll smack you with some deep musing about whether we are inherently beings, or whether the act of being observed by others is what defines us as individuals.

Yep, that's what this book does.

I recommend it for fans of Gregory Maguire, unique fairytale retellings (and non-contemporary styles of writing...no first-person immersive, here), and philosophy fans.