"Though a girl, Alanna has always craved the adventure and daring allowed only for boys; her twin brother, Thom, yearns to learn the art of magic. So one day they decide to switch places: Disguised as a girl, Thom heads for the convent to learn magic; Alanna, pretending to be a boy, is on her way to the castle of King Roald to begin her training as a page. But the road to knighthood is not an easy one. As Alanna masters the skills necessary for battle, she must also learn to control her heart and to discern her enemies from her allies. Filled with swords and sorcery, adventure and intrigue, good and evil, Alanna's first adventure begins -- one that will lead to the fulfillment of her dreams and the magical destiny that will make her a legend in her land." 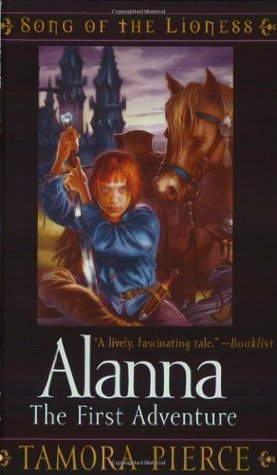 Alanna, The First Adventure is one of those novels that everyone tells you about. Apparently, a lot of women read this as middle graders and found is genre-breaking, and satisfying. And for the time it was published (1983) it was. But the problem is, a ground-breaking idea can't hold a book by itself, when (30 years later) it's up against phenomenal writing of the same concept, by other authors. So if I had read this in the '80s, I probably would have been utterly charmed by the concept alone. As it is today- being a fan of strong female protagonists, and YA, having read these things for the past 25 years- I just wasn't impressed. Feel free to throw tomatoes and stop reading right now; I fully understand I'm in the minority here.


Here are my issues:

And here are the things that made me cheer:

I'm going to keep reading the series, because I know I'm supposed to love it. But if it doesn't get much better by the end of Book 2, I'm quitting it.