Book Review: The House of Velvet and Glass

"Still reeling from the deaths of her mother and sister on the Titanic, Sibyl Allston is living a life of quiet desperation with her taciturn father and scandal-plagued brother in an elegant town house in Boston’s Back Bay. Trapped in a world over which she has no control, Sibyl flees for solace to the parlor of a table-turning medium.

But when her brother is suddenly kicked out of Harvard under mysterious circumstances and falls under the sway of a strange young woman, Sibyl turns for help to psychology professor Benton Derby, despite the unspoken tensions of their shared past. As Benton and Sibyl work together to solve a harrowing mystery, their long-simmering spark flares to life, and they realize that there may be something even more magical between them than a medium’s scrying glass." 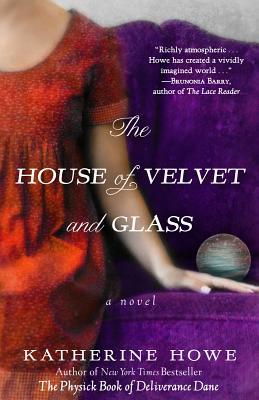 I had high expectations for The House of Velvet and Glass. Katherine Howe wowed me with The Physick Book of Deliverance Dane so I was expecting more of the same.

That'll teach me! This second book of hers is pretty much nothing like her first. It was slow in development- more than halfway into it, I was wondering if there'd be any element of the supernatural. There is, but it's not crucial to the plot. The plot is basically a drama with a stiff, unconvincing romance thrown in for good measure.

The things I liked:

The things I disliked:

So you can see, if I went into it assuming it was an historic drama, I would have been pleasantly surprised and perhaps enjoyed it more. I recommend it for fans of nineteen-teens historic fiction, Boston history, and multiple POV & timelines, and those who don't mind loose plot threads, shallow characters, and molasses-in-winter plots.