Synopsis according to Goodreads:
"In this darkly riveting debut novel—a sophisticated psychological mystery that is also a heartbreakingly honest meditation on memory, identity, and aging—an elderly woman descending into dementia embarks on a desperate quest to find the best friend she believes has disappeared, and her search for the truth will go back decades and have shattering consequences.
Maud, an aging grandmother, is slowly losing her memory—and her grip on everyday life. Yet she refuses to forget her best friend Elizabeth, whom she is convinced is missing and in terrible danger.
But no one will listen to Maud—not her frustrated daughter, Helen, not her caretakers, not the police, and especially not Elizabeth's mercurial son, Peter. Armed with handwritten notes she leaves for herself and an overwhelming feeling that Elizabeth needs her help, Maud resolves to discover the truth and save her beloved friend.
This singular obsession forms a cornerstone of Maud's rapidly dissolving present. But the clues she discovers seem only to lead her deeper into her past, to another unsolved disappearance: her sister, Sukey, who vanished shortly after World War II.
As vivid memories of a tragedy that occurred more fifty years ago come flooding back, Maud discovers new momentum in her search for her friend. Could the mystery of Sukey's disappearance hold the key to finding Elizabeth?" 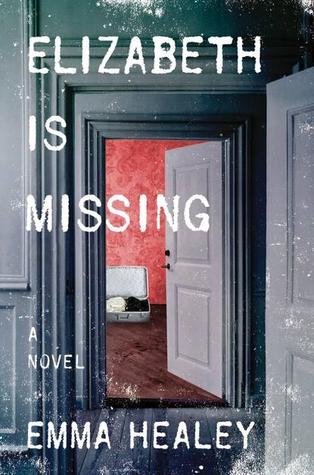 Elizabeth is Missing is a contemporary novel whose narrator is a completely, refreshingly, frighteningly new voice for me. This is the first time I've read a fiction wherein the narrator was losing her mind to dementia (or Alzheimer's). And it was chillingly exactly like what I fear I'll go through in 5 more decades (or what either of my parents will go through. Or my brothers. Or Fedora. But I'm the one with the existing memory problems, so it'll probably be me.)

So my own fears aside, it was wonderfully balanced (despite the recall difficulty Maude, the MC, is going through). There are two mysteries threaded throughout the narrative- Elizabeth, the friend who is missing in present day, and Sukey, the sister who went missing in 1946. While I had some suspicions (that changed as we went through), I had no answers on either mystery until the final few chapters of the book. But it didn't seem rushed, or open-ended, or neglected at all. The balance between the tension-filled mystery and the slow (and sometimes self-aware) descent into dementia were equal plot drivers.

And I lovedlovedloved that none of the characters are painted as good or bad. Each is flawed by naivety, impatience, addiction, etc but all are admirable and understandable. Even the ones I initially disliked, I grew to have a grudging respect for.

It bears noting that the audiobook version is fantastic- the narrator was utterly believable as all of the characters.

I highly recommend this one to fans of fiction (adult), mysteries, and the exploration of the self and of aging. And pretty much for everyone, because it was surprisingly poignant, interesting, and unnerving.