Synopsis according to Goodreads:
"Wales, 1198. A time of treachery, passion, and uncertainty. King Maelgwyn ap Cadwallon, known as Noble, struggles to protect his small kingdom from foes outside and inside his borders. Pressured into a marriage of political convenience, he takes as his bride the young, headstrong Isabel Mortimer, niece of his powerful English nemesis.Through strength of character, Isabel wins her husband's grudging respect, but finds the Welsh court backward and barbaric, and is soon engaged in a battle of wills against Gwirion, the king's oldest, oddest, and most trusted friend. Before long, however, Gwirion and Isabel's mutual animosity is abruptly transformed, and the king finds himself as threatened by loved ones as by the enemies who menace his crown." 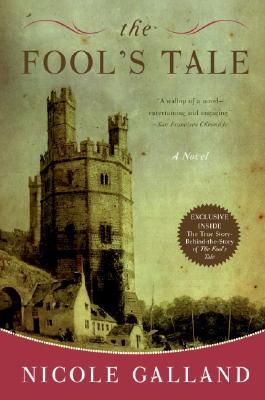 The Fool's Tale is not your usual medieval fiction. It's utterly compelling, with three main characters who are each lovable and hateful in equal measure (I love me some fallible characters). It makes for an excellent history lesson in terms of the relationship between Wales and England during the reign of Richard the Lionhearted (something I knew nothing about, previously). It's also an excellent story of human nature, obligation and power.

There's romance, but it's also not your typical setup. And nobody is made into a villain (and everybody is), and nobody is the hero (and everybody is). It's complex but not complicated, and although the first half was a bit slow and frustrating because I didn't like any of the three very much, by the middle of the book it took off. By the end, I was gasping and flipping pages like a fiend, skipping sleep and totally emotionally overwrought.

So, of course, I highly recommend it for fans of historical fiction, especially medieval. Also for fans of complex, three-dimensional characters with grey morality who are so real you feel like you could touch them. Also for fans of England, and Wales. And classic lit/myth (like Beowulf, Tristan & Isolde, Der Ring des Nibelungen, Arthurian legend, etc).