Synopsis according to Goodreads:
"Once upon a time, Hazel and Jack were best friends. They had been best friends since they were six, spending hot Minneapolis summers and cold Minneapolis winters together, dreaming of Hogwarts and Oz, superheroes and baseball. Now that they were eleven, it was weird for a boy and a girl to be best friends. But they couldn't help it - Hazel and Jack fit, in that way you only read about in books. And they didn't fit anywhere else. And then, one day, it was over. Jack just stopped talking to Hazel. And while her mom tried to tell her that this sometimes happens to boys and girls at this age, Hazel had read enough stories to know that it's never that simple. And it turns out, she was right. Jack's heart had been frozen, and he was taken into the woods by a woman dressed in white to live in a palace made of ice. Now, it's up to Hazel to venture into the woods after him. Hazel finds, however, that these woods are nothing like what she's read about, and the Jack that Hazel went in to save isn't the same Jack that will emerge. Or even the same Hazel." 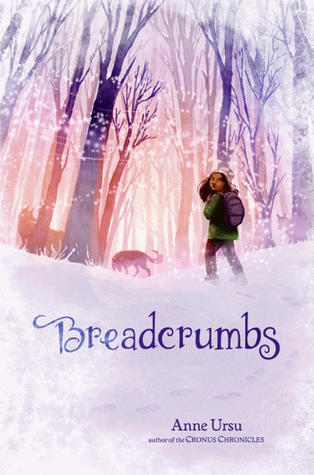 As a rabid fan of the fairytale The Snow Queen, Breadcrumbs has been on my TBR list since Fairytale Fortnight 2014. And I am so, so glad I finally got around to reading it!

Breadcrumbs is probably marketed to the middle grade or YA genre, because the narrator is 12-year-old Hazel, and it deals with friendship. But believe me when I say, this is an adult book as much as a kid's book- not because it deals with adult themes, but because it's so very poignant for anyone who has been through childhood. We grow up and go on, but this reminder about childhood belief, best friendship, and self-identity is bittersweet (from an adult perspective).

The story itself is very much The Snow Queen, set in contemporary times but with magical realism. It references an amazingly large amount of other fairytales, without losing the thread of the story at all. And I don't just mean somebody shows up with magical shoes- Hazel sees that dark underbelly of fairytales, and she gets it (without rationalizing it) and comes to her own conclusions.

I loved the utter focus on friendship (and, consequently, Hazel discovering her own strengths, even though she doesn't yet realize it, and growing away from her dreamy youth into the reality of a pre-teen). There is no romance in this book: it's friendship. And that made me so sad, because it reminded me keenly about that age, and having a male best friend, and the social pressures that tore us apart (that tear all kid friendships apart, to a point). You don't get a happily-ever-after, either. You get a conclusion, and a bit of hope, but the story pulls zero punches about the sad reality that you can't make things the way they used to be...you can only make them different than how they are now.

If you couldn't tell already, I loved everything about this story. I highly recommend it, especially to fans of respectfully-told, poignant growing up stories; fairytales and fairytale retellings; honest remembrances of childhood; strong female protagonists; anyone that enjoys YA in general.