Synopsis according to Goodreads:
"As a Gracekeeper, Callanish administers shoreside burials, sending the dead to their final resting place deep in the depths of the ocean. Alone on her island, she has exiled herself to a life of tending watery graves as penance for a long-ago mistake that still haunts her. Meanwhile, North works as a circus performer with the Excalibur, a floating troupe of acrobats, clowns, dancers, and trainers who sail from one archipelago to the next, entertaining in exchange for sustenance.
In a world divided between those inhabiting the mainland ("landlockers") and those who float on the sea ("damplings"), loneliness has become a way of life for North and Callanish, until a sudden storm offshore brings change to both their lives--offering them a new understanding of the world they live in and the consequences of the past, while restoring hope in an unexpected future. Inspired in part by Scottish myths and fairytales, The Gracekeepers tells a modern story of an irreparably changed world: one that harbors the same isolation and sadness, but also joys and marvels of our own age." 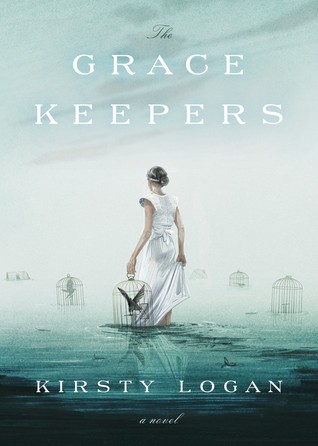 I binged on The Gracekeepers, starting and finishing it within 48 hours. It would have been read entirely in one sitting, if I didn't have pesky work and sleep interfering. It's lyrical, haunting, and incredibly imaginative. Logan keeps the story tension taut through the entire page-turning novel, and her cast of characters is amazingly realized (and yet always a bit tantalizingly distant). In fact, there are so many parallels between the damplings' circus and how this book is presented that it kind of boggles me.

This is a story about North. And about Callanish. And about a host of side characters who, like in the circus, have a spotlight/chapter all to themselves for an act, in addition to being the side characters of North's story. I have no idea what Scottish myths and fairytales this is based on, but it's unlike anything I'm familiar with.

I don't want to hype it so much that you're disappointed, but I definitely recommend it. To anyone who enjoys fiction, really. It's gorgeous and heartbreaking and unexpected and- just read it.