Synopsis according to Goodreads:
"Joanna Stafford, a Dominican nun, learns that her favorite cousin has been condemned by Henry VIII to be burned at the stake. Defying the rule of enclosure, Joanna leaves the priory to stand at her cousin’s side. Arrested for interfering with the king’s justice, Joanna, along with her father, is sent to the Tower of London.While Joanna is in the Tower, the ruthless Bishop of Winchester forces her to spy for him: to save her father’s life she must find an ancient relic—a crown so powerful, it may possess the ability to end the Reformation.With Cromwell’s troops threatening to shutter her priory, bright and bold Joanna must decide who she can trust so that she may save herself, her family, and her sacred way of life. This provocative story set in Tudor England melds heart-stopping suspense with historical detail and brings to life the poignant dramas of women and men at a fascinating and critical moment in England’s past." 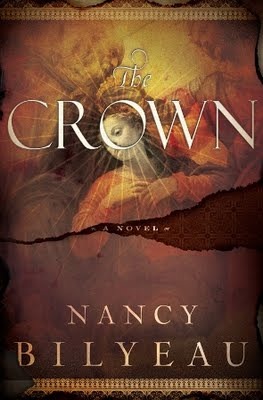 The Crown is a very engrossing historical fiction that takes place during the reign of Henry VIII. During this era, Cromwell (at the behest of the king) dissolved the many priories and abbeys in England at the time, under the excuse that the Catholic power system was entirely corrupt. It was cunningly done- the establishment of the Church of England allowed a PR campaign that turned much of the populace against the Catholic bishoprics, painting them as obscene and filthy rich. To read this era from the point of view of a Catholic nun caught up in the political machinations of Bishop Gardiner (Cromwell's sworn enemy) was refreshing and poignant.

Of course, when I describe it like that it sounds dry. This book is anything but! There's murder, betrayal, political scheming, a desperate race against the clock, executions, addiction, sexual assault (referenced, not described) and more. The protagonist, Joanna, is in her late twenties, well-educated, curious, shrewd and compassionate. As a narrator, she's an excellent bridge between the expected roles of women during that time, and our modern sensibilities. I thoroughly enjoyed her story.

The pacing is another area in which this book shone. It never felt dull or dragging, though the events within it span several months, and it references many Catholic things I don't have familiarity with. Yet I never felt lost or pushed out of the action.

As an audiobook, it was excellent. Nicola Barber manages to convey innocence without naivety, and handles the span of accents well. I will admit that there is a sort of a love triangle in this book BUT it's handled exceptionally well. So well, in fact, that it didn't bother me at all. It's actually concluded in a way I've never experience before, especially not in historical fiction. I'm excited to continue this series, and Joanna's story!

I recommend this book for fans of historical fiction, especially British history around the time of Henry VII, and/or the history of medieval Catholicism. I also recommend it for fans of strong female protagonists whose intellect is more driving than their ninja skills, and fans of hidden-artifact-type mysteries.